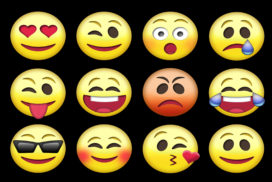 The transformation from telegram and postal letters to e-mail and SMS has already put down its mark on the society. The continuous practice of sending message through the social networking sites and the widespread apps has instilled the habit of using short forms in messages. Words like for, why and to – are replaced by single syllables or numericals like 4 and 2. But as Marx said the world to be dynamic; remodeling is the fundamental right of the society. To make chats more interesting, smileys are invented. These are small digital images or icons used to express an idea or emotion in electronic communication. The wordless tongue has become very well-liked and trendy in the current e-world.

Known as “Emoji”, they have liven up the text messages with tiny smiley faces. These symbols not only garnish the simple chats but are also used to parade the current mood of the sender. Alike Wikipedia, the home for numerous Emojis is called the Emojipedia, the Emoji search engine. According to a survey by Luminoso, a text-­analytics company, of the website emojitracker, the most used Emoji on Twitter was the symbol for “joy”, which looks like a smiling with tears of joy. This emoji has been in the top 10 most popular emojis on Emojipedia for all of 2015, and was deemed the 2015 word of the year by the Oxford English Dictionary. If we count all emojis together starting from the Smiling Face to the Grinning Face or Winking Face and Smiling Face With Heart-Shaped Eyes and Kissing Face, not to mention House With Garden and the Love Hotel and Ghost and Money With wings—then emoji, as a group, are now used more frequently on Twitter than are hyphens or the numeral 5.

Sumesh Dugar, a Kolkata based software entrepreneur, has developed a software named ‘TrueEmoji’ that can recognize emotions. The Application is programmed such that it will be able to read the expressions of a person in a conversation: like if a person is happy while talking with the recipient later immediately will feel it and will respond in the same way. Whatever the emotions be, the app will analyse and help the respondent react in same lines making conversations alive. Kolkata, a highly emotive place, has compelled Dugar to think of the deficiency in expressing emotions therefore making daily conversations more of robotic in nature. He hopes to change the nature of social communication.

This elasticity of meaning is a large part of the appeal and, perhaps, the genius of emoji. They have proved to be well suited to the kind of emotional heavy lifting for which written language is often clumsy or awkward or problematic, especially when it’s relayed on tiny screens, tapped out in real time, using our thumbs. These seemingly infantile cartoons are instantly recognizable, which makes them understandable even across linguistic barriers.So let’s celebrate the day of the tiny characters who are complementary to our everyday communication.