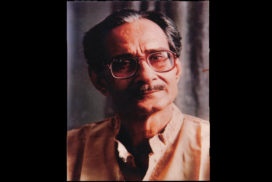 A rainy afternoon, the roads glittering silver with the droplets of water and as I pass the security check of the Ajanta Apartment, the staircases greeted me well till the doorstep of the Kichlu family, and there was the elder daughter-in-law of the family to greet me. Candy, the female pet dog, though was annoyed with my presence but with the passing moments, she adjusted with me. Waiting for both Mrs. Veena Kichlu and her daughter-in-law Yogita Kichlu I was surveying the room.

It is Shrimati Veena Kichlu who founded the Pt. Ravi Kichlu Foundation in the loving memory of Pandit Ravi Kichlu to make his work survive through years down the lane. This thought instantly instigated the idea of women empowerment while the history speaks boldly of the love of Shah Jahan for his beloved wife Mumtaz, this reflection and establishment of love is no less than that were to keep the works of her husband Mrs. Ravi Kichlu started a foundation.

Veena Kichlu, name blazed across the firmament of Hindi Theatre then, when no script was written without a role she could fit into, and no weekend passed without her ascending the stage to belt out dialogues – romantic, fiery or poetic. While talking to her nostalgic moments of her love, her emotional vocal had vent out the feelings she still harbour for her late husband who is still alive through the foundation. The Pt. Ravi Kichlu Foundation has four integral projects – Golden Talent Search Contest, Satya Sai School, Maaya and senior artist’s protection forum.

When I asked about the initial thought of founding this foundation, with emotional eyes she said,

“I believe in not falling in love but rising in love. And it was this idea that I thought that the works of the genius should not be lost. A terrific Ranji trophy Captain for the Uttar Pradesh state, he was awarded of University Blue for representing the University (Benaras Hindu University) in five different sports, and the stager of classical music his qualities should have been transferred and transmitted from generation after generation. He was a farsighted person with a sharp vision to start a talent scouting contest for classical music.”

The Golden Talent Search Contest was started by the maestro Pt. Ravi Kichlu, a Kashmiri Pandit born in Almora in 1932, and educated at the Benaras Hindu University Pandit Ravi Kichlu was a doyen of the Agra Gharana, having trained under Ustad Moinuddin Dagar, Ustad Aminuddin Dagar, and Ustad Latafat Hussain Khan. The contest has been since more than a decade scouting rare talents in the classical genre. Earlier the contest was held at HMV and later it joined the foundation after the demise of the maestro. Raviji was not just a musician at par excellence but also the Director of ‘National Jute Manufacturing Company’ and after retirement, he joined HMV as COO. The Golden Talent Search Contest dived into various genres to scout real talents. Throwing light on the contest Veena ji speaks of her privileged position to be associated with many other maestros like without whom the foundation could not successfully be at the current stage.

Mrs Veena Kichlu emotionally talks about the people who stood by the side in developing the foundation and sustaining the works.

The foundation does not stop here; it has gone beyond music to impart the primary education to the children through their school (SATYA SAI SCHOOL) founded by Smt. Sushila Mishra (mother of Veena Kichlu) to develop to their full potential and putting them on a path for success in their life along with providing Mid-day meal. She further started another Satya Sai School in a village called BONOGRAM, West Bengal which imparted education to around 50 children regularly.

While Yogita Kichlu accompanies the interview session the discussion became more diverse as she has started the ‘Maaya’ project under the foundation. The project that takes care of the non-human living beings who came from the animal kingdom largely to be neglected by the humane souls.

A foundation with a spectrum of activities and an umbrella for people with diverse needs the foundation has been a rescue factor and it is hoped that in future more such efforts will be endeavoured for the betterment of the society.