Take around 1 cup of basmati rice and clean it with fresh water atleast 2 times. Take a container and around 4 cups of water to it. Add bay leaves, cloves, cardamom , cinnamom  and bring it to a boil. Once the water starts boiling add the rice into the container and cook until it is cooked 80%. Once it is cooked 80%, strain it and let it cool.

Take around 1 cup of soyabeans and soak it in water for around 2to3 hours. After 2to3 hrs, squeeze all the water from it and keep it aside . take a mixer grinder jar, add all the soyabeans into it, add around ¼ cup of water, and grind into a fine paste. Once it turns into a fine paste, take it out in a container. Add finely chopped onions and coriander leaves and then add salt to it accordingly and mix it well.

Heat some water into a container and boil it. Once the water starts boiling, make small balls of soyabean mixture and add them slowly into the water. boil it for around 10 to 12 minutes. After 12 minutes, take out the soya ball one by one and let it cool.

Add some oil into the pan and let it heat. Once it’s heated, add the soya chap and fry it until it turns golden brown .once it turns golden brown, take it out.  In that same oil, add sonecinnamom , cardamom, cumin seeds, black pepper, big cardamom and cook it for 1 min. Then add the fine paste of green chillies,  tomato and ginger. Mix it well and cook it until it releases oil.

Take a cup of curd, add turmeric powder, coriander powder, Kashmiri red chilli powder, garam masala and mix well. Once the paste is ready, add it into the pan, mix well, and cook until it releases oil. Once it’s cooked well and has released oil, add the fried soya chaap into it and cook well. Add ¼ cup of water and cover it and cook well for at least 5to6 mins. After 5to6 mins, turn the flame off and take out the half soya chaap gravy in a bowl.

The half gravy in a pan is arranged correctly and evenly, and add half of the rice. Then add the left gravy on top of the rice and add half of the rice left .add some coriander leaves finely chopped ad then add some yellow food colour and around 2to3 tsp of ghee to it. Cover it with aluminum foil, cover it with a plate, and put any heavy object on top. Cook it for 10minutes in low flame. After 10 mins, turn off the flame and serve it hot.

Take a pan and heat it. Add a spoon of ghee to it, then add cumin seeds and green chillies and stir fry. Then add the finely chopped spinach to it and cook for 2 mins. After 2 mins, turn off the flame. 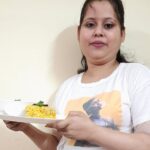 Amisha Gupta is a student and loves to cook food.